But today is not someday. We have to live with today.

As my nerves in my body prick me like needles I sit here thinking how things used to be.

I get sick sometimes, these things happen and I don’t expect much. Hell I prefer to be left alone

But… you of all people. You know I am in pain, you know what I am going through and you just don’t care anymore.

I wonder if it is the years of growing up seeing me like this you have given up caring? Or is it that you have found someone else more deserving of your time and affection?

Maybe it’s me? Maybe I am the one giving up and giving into the pain. Letting myself drown in it.

I wish for things to go back to the way they were or even better, pain free!

Let me tell you it was a mind blowing realization. To know that its not me but them. How might you ask did I figure this all out? That its really the people I was around and their negativity rubbed off on me. Well, once you remove all the people from your life with black souls, hatred, daily negativity. Your left with your self. With the positive people in your life and you decide if you are good or not. I love life, I love my family and friends. I have good days and bad just like everyone else but to see life as happy as I do now is great!

I always have told my children to surround your self around people that are good and people that will treat you the way you want to be treated. Why did I not listen to my own words? Now I do!

Driving him to school today we passed some kids at a playground. He looks over and says “How cool would it be to be little again”. I agreed. To go back to a moment, a day, or a time in your past that is your favorite. He said. I would choose 5 years old but with all of the knowledge I have now”.

As I am dropping him off I give him a hug, say I love you. What is really running through my head was 5 years old would be the last age I would pick. I know everybody has a past, everybody has a story but for me in my life at age 5 was when life ended.

Im not saying that I haven’t had some horrific shit happen after but I think when your older you can cope. When your little you don’t understand whats happening around you. Before 5 I had what seemed a “normal” family, a “normal” life.

Christmas was coming around, my Papa (my mom’s Dad) Passed away suddenly of a heart attack. He was one of the most important people to me in the world. Within weeks my Dad left. I was not aware at that time he had been cheating on my mom and he made the choice to leave our family. Who knows, the stress from my father cheating on my mother could have resulted in killing my papa?? His baby girl being hurt like that…

My mom had graduated high school from a small town, joined the military during Vietnam war were she met my dad. They married and had five beautiful children. She became a house wife. When he left she found herself alone, never worked a day in her life… She had 2-3 jobs at a time to keep us in our house, fed clothed and off welfare. My dad did very little to support us.

My oldest sister moved out, got married. My oldest brother moved to Arizona for school. My best friend across the street and his mom who was like a second mother to me moved away. So here I am going from life as I know it to No Dad, No Mom, No Brother, No Sister, No Friend, No Papa, No One to count on, to depend on…

My Brother Jon and Peder were only a couple years older than me. Jon had to grow up fast, he became the man of the family. Even though he wasn’t old enough. Not by maturity, by age or by the laws standards but if he hadn’t stood up and helped raise my brother and I don’t know if we would have all made it? My mom did her best but he was the glue that held us all together. He made sure we got on the bus, got off the bus safe, had breakfast, he even learned how to cook dinner. Cleaned the house and would even get us to kick in. Mom had to get sleep in between every job. She was either at work or sleeping.

My mom went from a stay at home mom baking cookies, going to all the school functions, cooking all of the meals, being there for everything to being absent. She had to work! I remember I would fake being sick sometimes just so that she would have to leave her job and pick me up and take me to work with her for the whole day! It would frustrate her but then I knew that her and I would get to have alone time. It was the only alone time I remember having at that age. She had a job at a chemical factory where she had a desk in the middle of a huge warehouse. It was so cold, she would sit me next to her and this little space heater. I remember getting orange juice from a food truck. That was one of my happiest times with my mom, I was with her.

I failed that year at school. Even when I was there I was checked out. I learned nothing, I cared about nothing. It is so hard to care about school when your life changes so much.

My memories of my Dad at that age were that if we wanted to see him we had to call him to set something up. How is that fair to put that on your children? I was five years old, I didn’t know what was going on. My mom Bless her, never said one bad thing about my father. That was one way she protected all of us was by not speaking about what happened between them. Their business was their business. I did hear her cry some nights. I cried myself to sleep so many nights feeling so alone. Feeling as if everyone had left me and not understanding what I had done wrong to make everyone leave.

I would Pray to my Papa every night for years to come home. That he could fix everything. That everything was ok when he was alive… My Mommy and Daddy were together my family was whole.

If I could pick any age it would not be 5 unless it was to warn myself that life was going to be rough for awhile but good things come out in the end.

Rip Of The Tape!!! Stop caring what someone might think or say to you! You might be surprised how excepting people can be and if they judge you then really, do you care what they think anyways? I don’t… The only opinions that matter to me are my children and that is only to a point because they are children! This is the day that you speak your mind! It feels liberating to stop holding back my feelings, my emotions anymore. Yesterday I feel as if for the first time in over a year I could finally open my eyes and see. I could hear for the first time. I ripped of the tape and I can speak! Believe me I plan on speaking my mind!

Rather than looking into the past I am trying to focus on the this moment. At least that’s what I am learning to do. With this constant pain I endure and the reality that this is it. It’s so hard not to look at old pictures of my children and memories of when they were younger. Thinking do they even remember me before I was diagnosed? Do they remember the mom I was before I was in pain all the time? Living in this moment is hard.

Sometimes I want to skip a bit into the future… What will I be then? A better wife, better mom, better me? Or still just in pain just a few less years of my life.

Maybe one of the lessons of “living in the moment” is not dwelling on the past or worrying about the future. I can’t change anything. I can’t make what I have magically go away. It’s here.. Deal with it!

My son messages me today that he is afraid. That he feels that he will not get the GPA this quarter that he has worked so hard to achieve. His finals are not working out the way he had hoped. I try and console him. Let him know that I am here for him. He can only do his best. He needs to stop, breath and take a moment. Think has he tried his hardest, does he feel good about the job he has done? Sometimes in life thats all we can do. I forget to take my own advice sometimes. Stop breath and take a moment. Stop stressing and worrying about the things I cannot change. Live in this moment! If everyone stopped and lived in this moment right now how much weight would lift off our backs? How much more time would we have in our life for our loved ones? Just a thought…

I guess anything worth doing is worth doing right. But what happens when you do not know what the right decision is? You are at a crossroad and each road could take you down completely different paths. Do you just blindly go and hope for the best? Or carefully go through every little detail and hope that you make the right choice?

Ever since I was a little girl and my Papa died and then my father left me I have had strong feelings of abandonment. With that comes the fear of change, the unknowing. I am sometimes a realist, I know things can not and will not stay the same for ever but when your life is going along day to day and things are happy and all of a sudden BOOM, Change! Its a harsh reality and at that point makes you wonder whats next? What else am I going to lose, or what else is going to change in my life tomorrow if tomorrow even comes?

I wish I could go back to when I was a child sometimes. Before my papa died, and before my dad left me. Before my mom who was at that point a stay at home mom had to then get 2-3 jobs at a time to support us, to keep us fed and in our home. If I could relive any moment in my life I believe I would choice that moment when life was calm and I did not have to make the grownup decisions for my family.

Now its unto me… What road do I take? Do I go blindly or think careful about every decision I make. 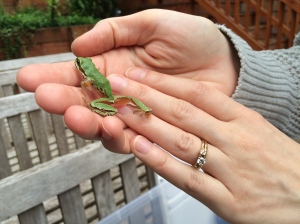 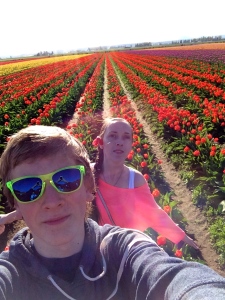 Finding Frogs with my daughter in the garden or taking walks with my kids through the Tulip fields. Reminders like these get me through the winter.

Having something no one can see…
Blog at WordPress.com.